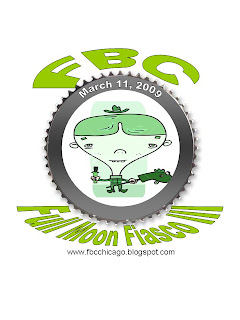 (Click the Spoke card to see the pix--they're on my facebook until Chainlink fixes the album feature.)
On the Full Moon Fiasco, viewing the actual moon seems to be inversely porportionate to the viewing of moons of the bare ass variety. This was the first Fiasco with skies clear enough to see the moon in it's shining splendor. (Matt H had good route intel that we could see it over the Graceland Cemetary on Clark.) But sadly, there was not a critical mass of shining white ass later in the eve. Sadly, there will be no full moon photo this month.
So speaking of ass, it was cool to see some new faces on the ride. Matt, McKelvie and Brett were our honored newbs on Wednesday. The hazing process involved allowing them unmolested access to the bar to drink beer as they felt necessary.
On the ride, we did take a beer break at O'Shaugnessey's, as was the tentative plan, to celbrate Irishness. I had a pretty goddam delicious Three Floyd's Alpha King Pale. It is a beautiful thing to behold.
The plan to ride up Damen to demonstrate to motorists how cool we look was thwarted by whoever was riding point, who decided to roll straight up Ravenswood. Ravenswood is awesome for all practical purposes because so few drivers are on it, but not nearly as adventurous when riding en masse. Well, whatever, we got to Fireside in a relaxed manner and drank more beer.
Posted by FBC Chicago at 2:53 PM 2 comments: