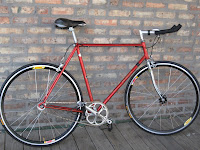 Red Five, you were a good bike. I never really called you by name since that happy day years ago when I finished building you the first time. Named after Luke Skywalker's radio handle during the attack on the Death Star, you weren't even red then but silver with red tires.
In your first incarnation, you were a great fixie, and I thank you endlessly for carrying me injury-free through the streets of Chicago with no brakes. Your cold steel was smarter than me.
After your first tussle with a car, I had to replace your frame. It was exactly the same size, make and model, but this time a very sexy red. You looked good. You went to freewheel and got a front brake then too, I remember. You didn't even complain about the downgrade in hipness.
You were there for two collisions with cars, two broken hands, one girlfriend came and went (but you stayed), three broken ribs, internal bleeding and a few days in the hospital, three stolen wheels, thousands of miles taking me to and happily FROM my day job, the very first FBC ride, and thousands of blissfull deraileur-free crusing miles.

But, due to massive frame failure on Thursday, January 15, I have to put you to rest. You were a good bike. A cool-looking, tough and reliable bike. You will be missed.
I'll be humming taps as you pass to that great velodrome in the sky. 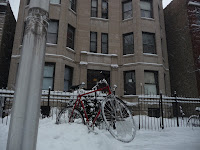 What else has been going on?


The Midnight Marauders struck hard on Saturday, 1/17. I got drunker than hell. The five miles between bars in 15 degree temps fooled my brain into thinking it was sober, so of course chugging ensued upon arrival at each new bar. But, 'twas good times, and met some new folks.

Then there was the Winter Bike To Work Day today. I did not get drunk for this one. There didn't seem to be very many drunk folks in Daley Plaza either. It was though, great to see so many commuters out on a cloudy, cold snowyass day. Lauren, whom I met on the Marauders ride was there handing out Bike Winter Balaclavas. I declined one, but it did remind me that I've been neglecting the Bike Winter stickers I was supposed to stick around town. It seems when I find a dry surface on which one would stick, and I'm thinking about it, I don't have them along. Anyway, I'm going to try to post a few pix below: 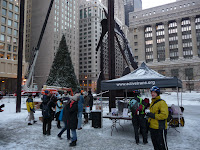 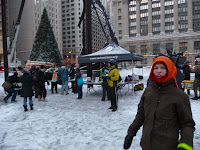 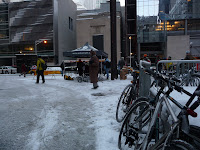 The sad news is that the elements finally won over on my Motobecane frame. Last Thusday the seat tube broke clean from the bottom bracket. The net result is me cranking out miles on my backup commuter, my beloved yet breaking-down mountain bike. Another result of this tragedy is the decision to graduate from vintage 1970s road frames of which I've been so fond, but keep destroying one way or another. My brand spankin new frame is on the way to me via an internet purchase, and I am looking forward to her first photo shoot, which I will certainly share with all of you.
Posted by FBC Chicago at 3:46 PM No comments: 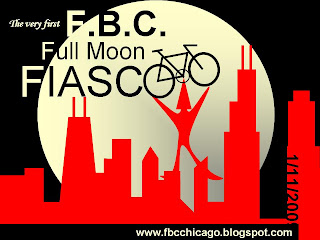 Ah the sweet sensation of success! It’s like a pair of undies from the fridge on a hot day. Though it was anything but a hot day, the first ever Fiasco in Chicago turned out even better than expected. Some inroads through thechainlink.org and bikewinter.org helped get the good word out. The final count was 10 helmets, all frozen. Click the spoke card above to see the pix.

The Gingerman turned out to be a good meeting place, not only because they have Rogue Dead Guy Ale, but we had plenty of room to get our pre ride drink on by the front window. At launch time, it was about 20 degrees with little wind. The backstreets we took to get going were a little treacherous and showed the theory that skinny road tires may indeed be superior to fatties in snow and ice conditions. My “ice skates are better than beach balls” theory was not proven true per se, but the evidence sure made me feel smart.

The plan was originally to spread some bikewinter.org stickers along the way, but staying in motion trumped all as our fingers slowly turned to frozen sausages and snotcicles began forming from the tips of our noses. All the major streets were nice and clear (and it’s not even an election year) all the way to Riccochet’s in Lincoln Square. Smooth.

Riccochet’s brought discussion of themes for future rides, how to get more people involved and the usual banter associated with pitcher after pitcher of PBR. The PBR also inspired the Full Moon over Lincoln Ave photo as a double entendre. I’ve got to tip my helmet to Ammo for that idea.

So, not many bikewinter stickers got stuck, but good times were had by all. Thanks to all who braced against the weather and joined. See y’all next lunar month!
Posted by FBC Chicago at 10:26 AM 2 comments:

The time has come. FBC Chicago joins the ranks of the St. Lou and Spokane chapters by launching our first Full Moon Fiasco. Monkey see, monkey do I guess. The plan is to meet up at the Gingerman where Racine and Clark Street meet (next to the Metro) for a few beers around 8. Then we ride at 9. Destination will likely be Riccochet's in Lincoln Square.

So, don your warm apparel and lube that chain. Let us roll.
Posted by FBC Chicago at 11:09 AM 2 comments: