December's ride will be on Friday, December 1st. We will meet at Cardinal Wine & Spirit, 4905 N. Lincoln around 8, ride sometimes after 9.

And then stay tuned for 2018 rides! So many blue moons! Everything gets crazy!

We had spoke cards! On this ride we disappointed Bob the bartender by showing up a day earlier than expected, crashed a ladies' dance party and put the pee in Peek Inn. 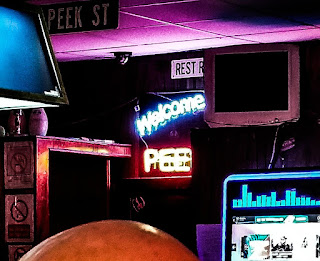 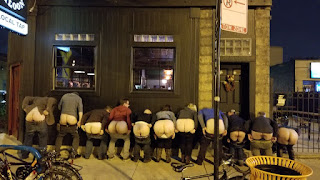 I'm late on recaps so here are some photos presented without comment (because I don't know what was going on). 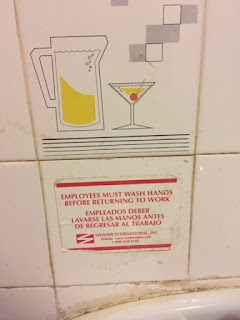 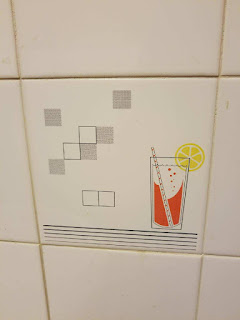 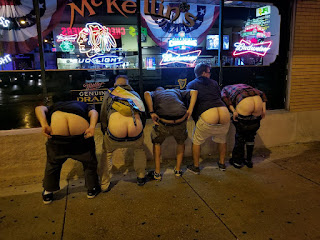 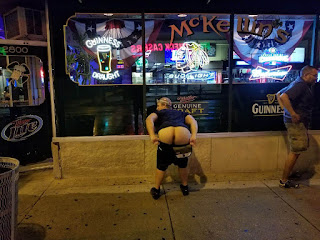 Next ride is Thursday, October 5th! Meet at Cardinal Wine & Spirits, 4905 N. Lincoln sometime around 8, ride sometime after 9.
Posted by FBC Chicago at 9:29 AM No comments:

Sometimes when you don't go to FBC, FBC ends up in your yard. 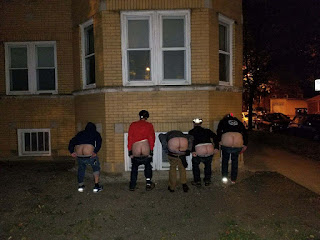 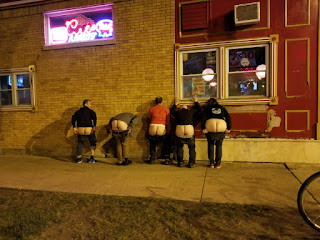 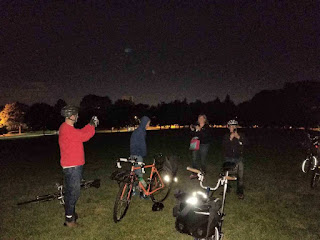 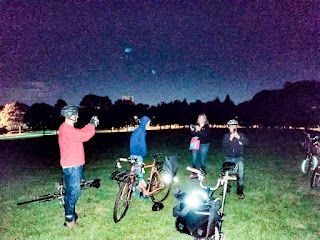 Posted by FBC Chicago at 9:28 AM No comments:

Next ride is September 5th! Meet at Cardinal Wine & Spirits around 8pm, leave sometime after 9pm.
Posted by FBC Chicago at 2:37 PM No comments:

This ride took us to the far away land of Galway Bay. 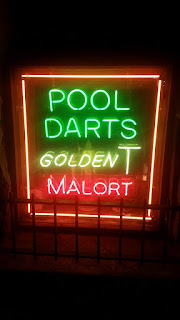 I always like bars that let us take our moon pic inside. Sorry to the butts who didn't make the pic. We are going to have to stack butts next time. Or maybe a pyramid? 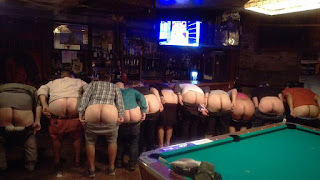 For the next ride, I think we should play bingo! 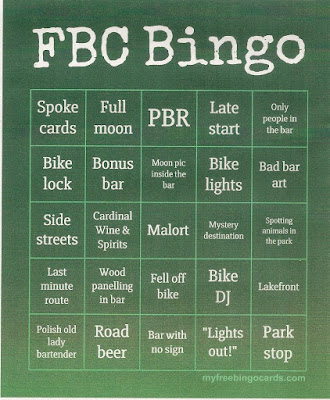 Posted by FBC Chicago at 2:35 PM No comments:

July: Sand in Your Tires

Cardinal Wine & Spirits really has us spoiled. This time Bob made us Italian beef with homemade giardiniera! After beef and blackberry shooters, we were ready to ride.
We headed down to Montrose beach just in time for the police to come by and tell us the beach was closed. We had a half hour left until closing but I guess someone wanted to go home early. We didn't let that get us down and headed to a quieter spot further North.


A little off the end of the lakefront path brings us to The Sovereign. They have handy Brompton storage at this bar.

We didn't stay long because talk of an extra credit bar turned into talk of glogg slushies.


Our moon photo got cheers from the cars driving by. 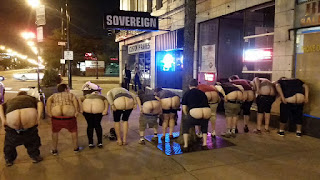 July 8th is the next ride!

We will start at Cardinal Wine & Spirits, 4905 N. Lincoln. This will be our meeting place for a while. It has a friendly bartender who makes us food, an attached liquor store and regulars who share their swedish fish. But still check in, just in case we change it up.


Meet around 8, leave around 9. Another summer weekend ride! Be there!

Posted by FBC Chicago at 9:46 PM No comments:

June: The Month of Butts

June's ride fell the day before Naked Ride. We were just warming them up.

We started at Cardinal Wine & Spirits, headed to the park and then to O's Tavern, where PBR is craft beer.
And everyone who showed up joined us on the ride! No stragglers left at the bar! 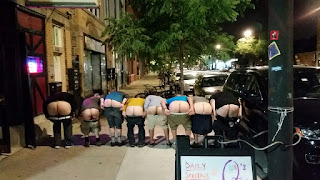 Posted by FBC Chicago at 9:42 PM No comments:

This is the month of the Strawberry Moon, and the ride falls on Naked Bike Ride Eve. A whole weekend of butts!
Posted by FBC Chicago at 11:08 PM No comments:


We spent weeks hollering at everyone to come out and the night of the ride the rain tried to scream louder. It poured but people still showed up! Our new bff bartender made us food because "you knuckleheads have to get some food in you before you go out there drinking!"

And he did this:


We had fun things to give away!


And we were successful at our beer century! We used a sticker method to track drinks. No one left unstickered. The rain finally let up so we grabbed park drinks (the advantage of starting at a slashie), stickered them and left.


Then the ride headed to the most wood paneled of bars.

We also found out about two more active FBCs, Madison and Sandpoint. Mad FBC calls their rides travesties instead of fiascos and they have themes!

Next ride is dangerously close to the World Naked Bike Ride. Will there be more than moons?

Prepare Your Bike and Liver for #100!


May 10th will be the 100th Full Moon Fiasco in Chicago! We plan to commemorate the occasion by attempting a Beer Century. If you don't know what that is then come find out! We'll need all the help we can get to finish.

Starts at Cardinal Liquors, 4905 N Lincoln. Meet up starting at 8, ride leaves sometime after 9.
Posted by FBC Chicago at 9:37 PM No comments:

The Full Moon made up for the one asshole bartender from last ride by giving us two great bartenders this ride!

We started at Cardinal Liquors where Bob offered to make us a crockpot of food and put our name on the marquee if we return. Bob wants to make sure we have some real food in us before we start drinking. We assured Bob that we are professionals and headed to the river.

Our group was passed by a few late night riders. My favorite was the guy holding a flash light as a front light. Safety first.

On to the next stop! As we pull up, I see the bartender peeking through the door and hear a lock. She asks "Are you stopping here? I had the door locked because no one was here." Why does she sound so surprised to have customers? Why is this not the first time this has happened on FBC?

So we had the bar all to ourselves, except for a brief visit from a guy and his dog who would not let me pet it.

We did not get barred. Liz loved us and gave us shots!

She said we could take an indoor picture but the bar was narrow and well lit so prepare yourself. We have some blindingly pale asses.

Not pictured: the bruise on my ass the next day from falling off my bike on the way home.


Meeting this month at Cardinal Wine and Spirit, 4905 N. Lincoln Ave. It is also the Full Egg Moon, so bring some cascarones and travelers. Meet around 8, leave around 9.

We found a sign of life in the FBC Universe!
Nashville has an active FBC! We have been talking to our new friends on Facebook and they might come in for Naked Ride in June.

March's ride was on the night of the downtown St. Patrick's Day parade so in comparison to the rest of Chicago we had a quiet responsible night.

You know how people say "Hey, slow down! Drinking is a marathon not a sprint!" Well, we sprinted.
We started off at Revolution Tap Room where you can sit and watch your bike while you drink, just like parents at the park.

The problem with hitting a bunch of bars and writing the update a week later is that you no longer remember the bar order. It was 5 or 6 bars. One bar we went in and it was even too crowded and smelly for us so we immediately left. One bar was closed. Not just for the night, it's been closed since January.

That bar being closed led us to a bar with a prick bartender and we will probably never go back, maybe never allowed back? Fuck it.

I think the highlight of the night was the awful karaoke at the end of the night. It was around 4 at this time. It was also Daylight savings time switch so I'm not quite sure about the time. I know it's rare that karaoke is good but this was extra bad. A couple sang the Star Spangled Banner. A guy sang Tenacious D's Fuck Her Gently. One of our group snuck a song in to slightly raise the bar. 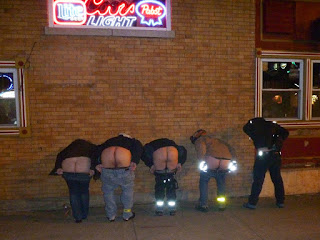 Next ride is Saturday March 11. If I did my math correctly, this upcoming ride will be FBC #98. The centennial is nigh!

Not to be confused with an athletic endeavor, we meet for some drinks then ride to another dive. Meetup starting at 8, ride leaves sometime after 9.Meeting this month at Revolution's Tap Room on Kedzie, bring your own food and bikes inside.
Posted by FBC Chicago at 12:37 AM 1 comment:

Love is in the Air

Celebrate your love for bikes and beer with the FBC!

Weather permitting we will ride past and have a park stop near the site of the Valentine's Day Massacre. Bring your Tommy guns!
Posted by FBC Chicago at 12:15 AM No comments:

For the past couple weeks there has been a reminder in my phone that says Butts. I am finally getting to my reminder so it's beating Join the Gym and Learn how to use pressure cooker.

I was doing a little research on mooning today. Did you know it was first documented in 66 AD and it caused a riot? I wonder how much mooning we have to do to get in on that Wikipedia article.

FBC or Fucking Bike Club is a loosely organized group of cyclists in the Chicagoland area. It's featured ride is The Full Moon Fiasco, which occurs on the night closest to the rise of the full moon. The group originally was member of a multi city franchise but appears to be the only remaining FBC in operation. It's ride leaders are chosen by their qualifications including owning a bike, riding a bike, drinking beer and staying out past midnight. The origin and destination points of rides are drinking establishments of low quality. In temperatures above freezing, participants will consume beverages brought from home in a low lit natural setting such as a park with many trees. The most celebrated custom of the ride is when the members gather, usually outside of a drinking establishment, and moon a photographer. (Which may one day cause a riot.)